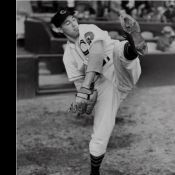 The 1948 baseball season saw many surprising events, new records, the death of Babe Ruth, and a few close calls.  Baseball came within one game of having an all-Boston World Series in 1948, as the Braves went 91-62 to take the National League flag by 6 1/2 games over St. Louis, and the Red Sox finished the regular season tied with Cleveland at 96-58.

The Braves were led by Bob Elliott -- who hit 23 homers and drew 131 walks, and .300 hitters Eddie Stanky, Al Dark, Tommy Holmes, Mike McCormick, and Jeff Heath.  On the pitching side, the Boston fans' cry was "Spahn and Sain and two days of rain."  Johnny Sain went 24-15 to lead the National League in wins, complete games and innings.

Warren Spahn, 27, went 15-12 with 16 complete games and 257 innings.  No other Braves pitcher won more than 13 games.  Apparently, there were enough rain-outs that Boston led the National League in team ERA, complete games, and fewest walks allowed.

The American League race was still up for grabs at the All-Star break with Cleveland, Philadelphia, New York and Boston vying for the title.  New York's Joe DiMaggio led the American League in home runs, and the Yanks' Tommy Henrich led in runs and triples.  As the second half wore on, however, the best hitting team, Boston, and the best pitching team, Cleveland, rose to the top.

The Red Sox featured batting champion Ted Williams, Dom DiMaggio and Johnny Pesky, who was tied with Williams for third in the American League in runs.  Williams batted .369, but lost out in the MVP voting to Cleveland shortstop Lou Boudreau, who was runner-up in batting at .355.

The Indians' main strength, like the Braves', was pitching.  Unlike their National League rivals, however, the Indians staff was a deep one.  The Tribe featured two 20-game winners in Gene Bearden and Bob Lemon, a 19-game winner in Bob Feller and spot starters Steve Gromek, Sam Zoldak, and Satchel Paige (who went a combined 24-10).

A coin flip determined that the one-game American League pennant playoff would be played at Boston's Fenway Park, and almost 30 years to the day before Bucky Dent's famous home run over the Green Monster, shortstop Boudreau won the pennant for the Indians with two home runs.

Cleveland then proceeded to make it a clean sweep of Boston, polishing off the Braves in the World Series.  Cleveland's Feller went 0-2, but the Indians beat the Braves in six games on great pitching performances by Bearden (who pitched a shutout in game three), Gromek (who posted one win and a 1.00 ERA), and Lemon (who triumphed in two games).

- After you download the total_classics_1948.7z file, double-click to open it.

- Extract the contents of the file into a folder.

- Find the location of a CLEAN (or patched) copy of MVP Baseball 2005 and click "Extract".

- Allow the program to extract all of the new content.

NOTE 2 -- An accurate 154-game schedule is provided in the database directory.  If you play a dynasty, you must use tywiggins' short season projector utility in order to continue onto the playoffs.