Hammerin' Hank, 1945, and How Jews Feel About Gefilte Fish

If you have never heard of gefilte fish, imagine if you took dead fish, mashed it up into a ball, boiled it, then pickled it.

So as the tale goes, with a week left to go in the 1938 season Hank Greenberg had 58 home runs. At this point his mother promised him if he could hit 61 homers she would make him 61 gefilte fish. Greenberg proceeded to hit 0 more home runs that season. Some thought it was because the league and country were filled with anti-Semites who might tolerate a Jewish ballplayer but not a Jewish home run record-holder. Some thought most ballplayers go much more than a week between three home runs. But the gefilte fish thing clears up any doubt for me: so long as there are people in the world who hate people in the world, Jewish women will continue to cook gefilte fish, and Jewish men will find new and original means of avoiding eating gefilte fish. So is the way of the world.

Much about that world is out of your control. Hank couldn't avoid the fact that the best years of his career came during the time everyone had to go beat Hitler. So Greenberg went as a 30-year-old,

..and returned a 34-year-old. In baseball in 1945 this was pretty old. However most of the boys were still overseas as the 1945 season got underway, so even an aging Hammerin' Hank vaulted the Tigers back into the World Series.

Thus began what some chroniclers have called the worst World Series ever, with replacement-level players abounding on both teams (remember this is two years before Jackie Robinson so most of the best ballplayers stateside couldn't play either). The result was an error-filled, will-someone-please-just-lose fest. Why the Cubs looked so terrible has to do with a sacrificed goat in biblical times or something, but you can probably guess what was wrong with the Tigers: Mrs. Greenberg almost assuredly promised another batch of gefilte fish.

Today we honor Hank Greenberg and the 1945 Tigers with their uniforms... 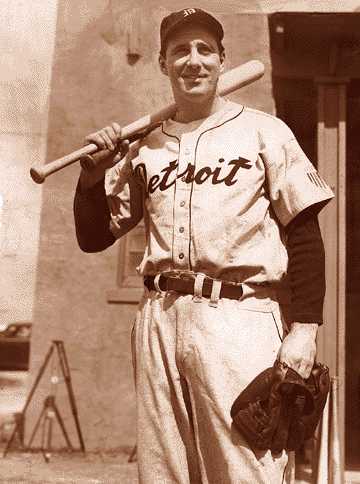 ...from the year Detroit won the War, the World Series, and the liberty of all mankind. We should never forget the tremendous sacrifices they made--not just giving up the primes of their careers to fight for Uncle Sam, but finally sucking it up and eating Bubbe Greenberg's famous baseball-shaped gefilte fish. You are true heroes.

Note: by now if you don't know to change the name of a uniform file from something made to work with TyWiggin's editor, leave it in the comments. Also: the team wore something like it last year to honor the '45-ers but they changed up the logo and wouldn't go back to flannels. I had no such compunction. I'm especially proud of how the chest logo came out.